End of the Road by Days Indoors

Talk about nostalgia. When I first came across this song it instantly brought me back to the 90s, and not in a dated way. If you have ever seen that scene from ‘Parent Trap’ (The Lindsey Lohan version) where they are driving through London, then you’ll know exactly what I am talking about. The song most certainty has a commercial feel to it. Any fans of Coldplay or Stereophonics are certain to love this. I really hope radio stations take to this song because in my opinion it could be a hit.

‘End of the Road’ is the first to come from the band’s second album Two Feet Under which will be available from 1st December and follows Dusty Road released in 2016.

‘End of the Road’ tips the typical break up song on its head. It reflects feelings of hope, relief and starting over rather than those of regret or sadness. This pop rock number is definitely refreshing in that regard. 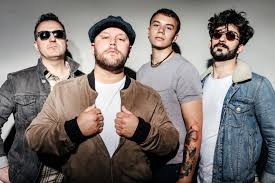 The song details the idea that end of something is not always a bad thing, as there is often a chance for a new beginning with lyrics like:

At the end of the road there’s a new beginning// take a breath and start believing// make the call and live another day.

Being a rock song, ‘end of the road’ has an inherent edge to it. With that being said there is something about it that feels incredibly polished and put together. Take the use of instrumentation for example. It has been thickened and stripped back at exactly the right moments, particularly noticeable in the intro.

I was also grateful to hear a clean, well placed outro as this seems to be something that is missing from a lot of modern-day music.

And how could I conclude a review without mentioning the wicked vocals from Days Indoors front man Joe Killington.

After hearing how amazing this song was I am sure you want to sample it for yourself. Check it out here and let me know your thoughts in the comments below.

3 thoughts on “End of the Road by Days Indoors”

This website uses cookies to improve your experience while you navigate through the website. Out of these, the cookies that are categorized as necessary are stored on your browser as they are essential for the working of basic functionalities of the website. We also use third-party cookies that help us analyze and understand how you use this website. These cookies will be stored in your browser only with your consent. You also have the option to opt-out of these cookies. But opting out of some of these cookies may affect your browsing experience.
Necessary Always Enabled

Any cookies that may not be particularly necessary for the website to function and is used specifically to collect user personal data via analytics, ads, other embedded contents are termed as non-necessary cookies. It is mandatory to procure user consent prior to running these cookies on your website.